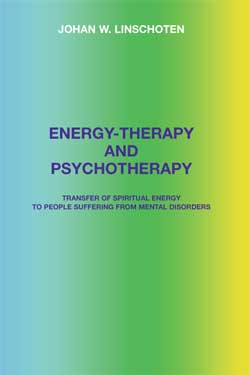 "…. a very important book, because it proves that it is possible to bridge the gap
between the regular western-scientific approach and some alternative
treatments…."

Johan Linschoten makes use of a gift to dispel stress from his patients and to pass on mental energy or strength of mind upon them via his hands.

In 1985 he was given permission by the Management of a famous Psychiatric Centre and by the Mental Public Health Inspection to experiment with his extraordinary method, within a clear framework under testable conditions.

He describes in this book clearly and systematically his experiences with this so-called energy-therapy (E.Th.) applied to patients suffering from mental disorders. He applies this method when other forms of psychotherapy are not applicable because the patient is fixed too deeply in his or her disorder of rigidity, fear, depression, psychosis or burn out. He illustrates his methods and vision with many examples.

In addition to the possibilities of E.Th. he also indicates its limits.
With this book the author hopes to reach all who are interested in phenomena of transpersonal nature, but in particular fellow-psychotherapists, which come across higher sense abilities in themselves.